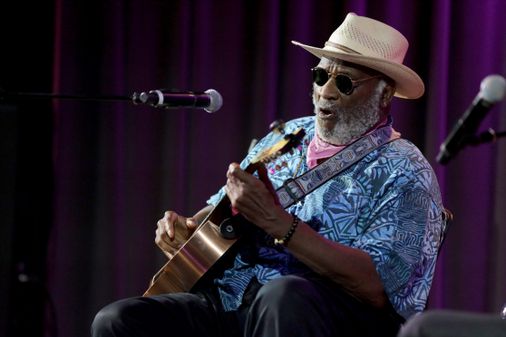 The A’s reunites Sylvan Esso’s Amelia Meath (who plays Sunday) and Daughter of Swords’ Alexandra Sauser-Monnig (both are also members of Mountain Man) with the yodel mode fully engaged. They’ve been playing together in this setup for a while, but have just recorded what they’re doing as “Fruit,” which features wonderful, delicate, harmony-laden renditions of songs by Shelley Duvall for the DeZurik Sisters. It’s whimsical and goofy too; as Sauser-Monnig says, “If it doesn’t make you laugh or cry, it doesn’t belong.” They launch the album in Newport.

Get the Big Task

Your guide to staying entertained, from live shows and outdoor entertainment to what’s new in museums, movies, TV, books, restaurants and more.

The word that keeps cropping up in discussions of Arooj Aftab’s music is “minimalist,” and for good reason. There is a restraint, a constant, resonant stillness to her music, which draws inspiration from where she comes from (she was born to Pakistani parents and sings mostly in Urdu) and where she came from (she emigrated to the United States in 2005, earned a degree in jazz composition at Berklee, and moved to Brooklyn after graduation). One of the songs you can expect to hear, “Mohabbat,” won the first Grammy for Best World Musical Performance.

This rising band from Louisville, Kentucky arrives in Fort Adams with their first full album under their belts. “Fits of Laughter” shows a band skating across genres – a little folk here, a little R&B there, a little rock ‘n’ roll there. (In a recent interview, vocalist Ryan Anderson described the band’s music as “bubblegum elf rock,” which it definitely isn’t.) On Sunday (and hoping they play it really loud), the crowd is going to go wild.

Born out of a website dedicated to addressing the lack of presence of black artists in country music, the Black Opry Revue hits the road with various aggregations of these artists, meaning you’ll likely get something different every time. that you will attend a BOR show. Newport’s lineup is jam-packed, with Buffalo Nichols, Julia Cannan, the Kentucky Gentlemen, Lizzie No, Autumn Nicholas, Chris Pierce, Leon Timbo and Joy Oladokun set to take part. Nichols and Oladokun will also perform solo sets at the festival.

The trio of Eric D. Johnson, Josh Kaufman and Anaïs Mitchell have a new album coming out in the fall, but that won’t be the focus of their Newport set (at least not their announced set). Instead, they’ll be gathering “friends” – Natalie Merchant, and more to be revealed – to perform “Mermaid Avenue, Vol. 1,″ Wilco and Billy Bragg’s ghostly collaboration with Woody Guthrie, in its entirety. Why this record? According to Kaufman, “24 years ago, this album was released and planted in us collectively the seeds that folk music can and should be remade/reharmonized and recontextualized to keep up with the changing times. “It feels like the kind of moment Newport is famous for.

As their name suggests (“give/take” is a rough translation), DakhaBrakha gives and DakhaBrakha takes; the picking comes from the folk traditions of ancient Ukraine, and the gift is the transformation they bring to these forms, injecting the “rhythms of the surrounding world” via the instruments that produce them. It’s the only group I’ve ever met that has an “ideologue” among its members. They are currently playing with particular urgency, responding to Ukrainian President Volodymyr Zelensky’s call: “Fill the silence with your music!” Fill it out today to tell our story.

Singer-songwriter Phil Cook (Megafaun, Hiss Golden Messenger) wanted to preserve and celebrate the gospel music tradition of North Carolina, the state where he lives. So he launched the Spiritual Helpline label to do just that, and for the label’s first release, he produced a live record with the Branchettes, a regional gospel group that’s been singing for half a century. On Sunday, Cook and the Branchettes will reunite on stage as “A Spiritual Helpline Gospel Revue.”

Ryan Gustafson considered stepping away from music at the start of the pandemic. Instead, he found new ways to relate to music-making, and a new Dead Tongues record, “Dust,” was the result. His songs are a bit more electric than previous attempts (guitar and pedal steel feature heavily), and it shows that Gustafson continues to make folk music of rare intensity and weight. It will highlight songs from the new record in Newport.

Hermanos Gutiérrez comes as announced regarding the name: The band is made up of brothers Alejandro and Estevan Gutiérrez. And when you hear the music they make – an all-instrumental Western-Latin mashup produced by the duo, one on guitar, one on lap steel – you’d think it too comes as advertised, that they’re from somewhere goes south of the border. In fact, the Gutiérrez brothers are originally from Switzerland, sons of a Swiss father and an Ecuadorian mother, and their cross-cultural excursions were pollinated by the music their maternal grandfather loved. Wherever they’re from, a commenter on one of their YouTube videos perfectly captured where they end up: “They’re just a vibe.”

The bluesman has been here many times – he first performed at Newport Folk in 1968 – but it’s been 34 years since the last time. Her inaugural appearance came on the heels of her self-titled debut album; since then he has released a few dozen records that have taken him to electric and acoustic blues, ragtime, reggae, zydeco, Caribbean, Hawaiian, and more, a body of work that has led the Encyclopedia of the Blues to rightly label him “the most eclectic and international of bluesmen. Consider him the former statesman of this year’s festival.

Stuart Munro can be reached at [email protected].