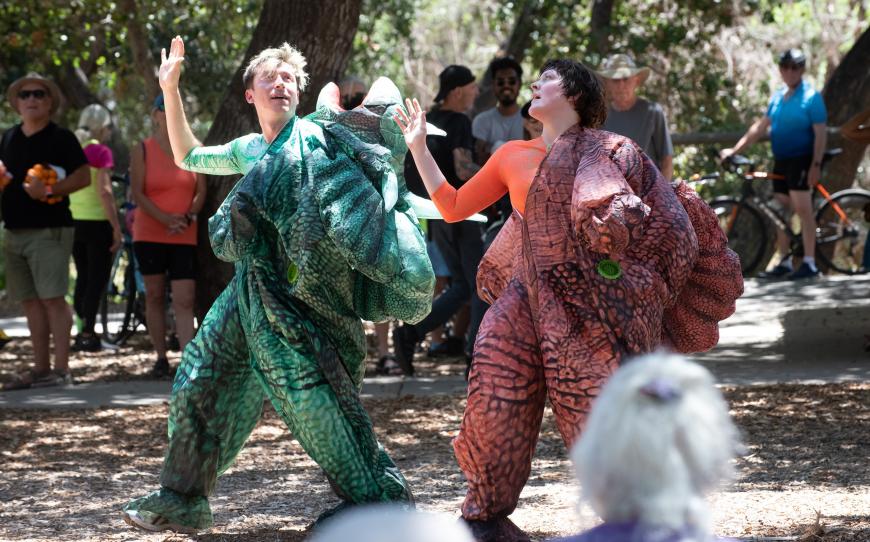 Like the story of the blind trying to decipher the vastness of an elephant, attendees at the 76th annual Ojai Music Festival were challenged to construct a four-day portrait of the multidisciplinary collective known as AMOC.

The name is a paradoxical acronym. On the one hand, it represents the organization itself – the American Modern Opera Company. At the same time, the word amok (its roots in the Malay language) describes a condition, to quote Merriam-Webster, “often born of overthinking”, where anything can happen.

The artistic identity of AMOC (co-founded in 2017 by composer/musician/conductor Matthew Aucoin and director/choreographer/dancer Zack Winokur) is deeply rooted in a process of collective decision-making. Meeting on a farm in rural Vermont, the members all have an equal voice. The result is a creative process that Aucoin describes as “delightfully messy!”

Multidisciplinary by design, AMOC’s extremely talented members include musicians, dancers, singers, writers and composers. Its self-proclaimed mission is to break down the barriers between music, poetry, theatre, opera and dance. As a result, Aucoin told me, the jigsaw process of putting together the full four days of Ojai programs “evolved from hundreds of hours of Zoom meetings.” Even so, no one could have foreseen that at the last minute one of the band’s stars, soprano Julia Bullock, would be forced to cancel when she tested positive for COVID.

The loss of Bullock had a profound impact on the festival which led to cancellations and quickly engineered program changes, including replacement performances by the fine soprano Ariadne Greif. As a result, the first two days of the festival, Thursday and Friday (June 9 and 10), were decidedly dark and moody. The one flamboyant exception was AMOC’s rendition of Julius Eastman stay on it (part of an all-Eastman program) that showcased the dynamic talent of bass-baritone Davóne Tines.

It was an all-Bach program on Saturday morning – featuring period instrument ensemble Ruckus and AMOC star flautist Emi Ferguson – that changed the mood of the festival 180 degrees. Suddenly there was a feeling of tangible joy as the musicians infused Bach’s sonatas, partitas and preludes with a combination of period precision and jazz-like energy. It inspired the audience and was echoed by a chorus of birds in the trees surrounding Libbey Bowl.

Then, like a cloud of Calvinist guilt, the mood was all but extinguished by Cassandra Miller’s repeated 257 bars. About Bach for string quartet. To be fair, had the piece been performed in a more intimate (air-conditioned) setting, its series of crystalline repetitions might have succeeded with flying colors. But being forced to endure it in the scorching sun was, as one viewer observed, “like being sentenced to purgatory.”

When AMOC members gather at their farm, dinner is a communal ritual that begins with a prayer of thanks. So it’s no surprise that one of the festival’s most anticipated premieres was that of Matthew Aucoin family dinnerwhich would feature all the musical and vocal forces of AMOC.

From the first chime of the bells which calls everyone to the table to a succession of mini-concerts “toasts”, family dinner is a celebration with many voices. ” What do you mean ? the host inquires, and the responses are varied, ranging from poetic and deep to chatty and raucous. These multiple personalities provide Aucoin with the perfect opportunity to employ a wide variety of orchestral and vocal styles (both sung and spoken). A dinner with AMOC can feel like a movie, as it does in the “Meridian Response” movement, funny with New York sophistication in “Frank O’Hara’s Toast.” There’s even a nod to John Adams (who was in the audience and programmed last year’s festival), titled “Song of Gratitude to Be Back in California.”

family dinner offered Aucoin a chance to go bankrupt, to push the envelope, but he never really took it. He’s a composer who always seems to watch over his shoulder to make sure he doesn’t take unnecessary risks and risk being offended or criticized. It’s a shell of self-protection he has to come out of. And if there was ever an opportunity for Aucoin to go wild, this is it.

Last year, the 75th Ojai Festival celebrated the next generation of California composers, especially from Berkeley. This year, the focus was primarily on East Coast academia. There was, however, a distinct West Coast composition, that of Andrew McIntosh Little Jimmy. His interpolation of field recordings of natural sounds (made in the San Gabriel Mountains) evokes the spirit of John Luther Adams. Composed before and after the Bobcat Fire swept over the title’s Little Jimmy campsite, the work begins rhapsodically over the tones and harmonics of bells, marimba and bowed pianos. This idyll in the first movement (with its recorded bird song) suddenly gives way to a fire alarm of hammered sheets and the impression of an immolation of flames. A very different sense of place returns in the third movement, with recorded sounds McIntosh made after the fire as nature attempts to heal.

All the public knew was that they were invited to a free public concert on Sunday called “Dance in the Park.” It would feature Julia Eichten and Bret Easterling dancing to Danube waves, by Ion Ivanovici. It has been described as “a festive event of tenderness, friendliness and fiery joy”. No one could have imagined that jurassic park was about to come to Libbey Park.

As the audience settled under the sprawling arches of an old oak tree, two cheerfully dressed triceratops, one pink, the other blue, slowly crept into the audience. They were seated behind customers unaware of their presence. But when one of the mischievous creatures approached festival director Ara Guzelimian, a worried security guard stepped in, asking, “Is he supposed to be here?” What followed was a cheerful and amusing pas de deux about love, extinction and human evolution – Charles Darwin meets Fancy. It was a top notch Ojai moment.

But that was just the beginning. In a second free event/concert, AMOC members performed the world premiere of a rock opera on historical themes, rome falls, something “Paul McCartney-ish”, with music, lyrics, narration and lead guitar riffs by Doug Balliett. This fully staged production featured the musicians and singers of AMOC, the world’s only vintage instrument rock bank (Ruckus), and the Ojai Festival Children’s Choir. Think of it as Decline and fall of the Roman Empire meets Jesus Christ Superstarperformed by Monty Python.

There were exuberant assaults from Davóne Tines, Ariadne Greif’s rising soprano (replacing Julia Bullock), and, fresh from her performances at the Metropolitan Opera in Philip Glass’s Akhenaten, countertenor Anthony Roth Costanzo as a chicken-fetish Roman emperor. It was very fun.

Unfortunately, the last concert of the festival was to feature Bullock’s vocals She sleeps, by John Cage and “Four Women” by Nina Simone. The cancellation of these works upset the balance of a program that then relied too heavily on Costanzo’s incoherent voice in a series of baroque arias and excerpts from Philip Glass.

But all’s well that ends well. To complete the concert, all the dancers of the AMOC took the stage for an interpretation of the “Ständchen” by Franz Schubert (from the company Open rehearsal, directed by Bobbi Jene Smith). Then, with a cover of Julius Eastman stay on it, the dancers pranced arm in arm in the aisles and at sunset. The 76th Annual Ojai Music Festival was over.