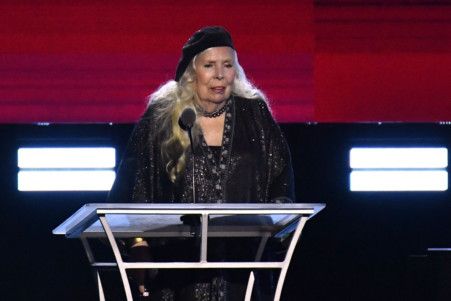 Music legends and hitmakers turned out on Friday to pay their respects to Joni Mitchell — the Canadian-born folk icon behind classics such as “A Case Of You” — at a pre-Grammys charity gala that took place. presented moving tributes and glazed eyes.

“It’s been quite a year,” the artist known for her distinct contralto and open-chord guitar told reporters on the red carpet.

In December, she was among the inductees at the Kennedy Center Honors gala, one of America’s most prestigious art awards.

The evening marked a rare public appearance for trailblazer Mitchell, who in 2015 suffered a brain aneurysm that left her temporarily unable to speak, the aftermath of which involved intensive physical therapy.

But on Friday she was beaming, telling reporters she had some artistic ‘ideas’ even as she continued to focus on improving her health.

The influential artist who inspired everyone from Neil Diamond to Prince is perhaps best known for the intensely personal 1971 album “Blue,” a deep dive into emotional heartbreak.

Expressing his own amazement at this milestone, Mitchell explained his album’s enduring popularity and recent resurgence: “Maybe people want to take it a step further.”

And when asked by journalists about her state of health, she replied “pretty well”, adding that she had “made progress”.

“She bares her soul, but she does it in such a poetic way,” Hancock told AFP on the red carpet, hours before he performed Mitchell’s song “Hejira” on stage. .

He credited Mitchell, who is widely considered one of the greatest songwriters of the 20th century, with teaching him “how to listen to the lyrics”.

“Some people – and I’m one of them – when we listen to music, we hear the musical harmonies and textures, and the lyrics sound like gibberish,” he continued.

Yet Mitchell’s “poetry” still strikes him, Hancock said, “No one writes lyrics like Joni.”

“She gave us all the courage to speak the truth,” said performer Billy Porter, who paid tribute to Mitchell by singing his beloved “Both Sides Now” on stage. “Using our art to grow; use our art to heal.

“To free other people – she’s powerful that way.”

The star-studded gala is an annual tradition of MusiCares, the Recording Academy’s charitable wing that raises money to help musicians in need ahead of the Grammy Awards.

This year’s celebration also featured a touching remote performance of “A Case Of You” by Graham Nash, from folk supergroup Crosby, Stills, Nash and Young, a band with whom Mitchell has deeply influenced and shared a rich working relationship. .

She’s also dated David Crosby and Nash, and has mined this latest breakup to draw inspiration from a number of songs featuring the seminal “Blue,” including the touching “A Case of You.”

Neil Young appeared in a video message sending Mitchell “lots of love”, while Stephen Stills attended the ceremony in Las Vegas and hailed Mitchell as “one of the great artists in this world”.

Canadian singer-songwriter Joni Mitchell smiles at Mickey Guyton (from behind) after performing with friends on stage.
Image credit: AFP

“When we were kids, we had a great time trying to figure out the chords she was using. Crosby turned out to be the most adept at it,” he told AFP. Crosby produced his debut album, “Song to a Seagull”.

Stills played guitar as Brandi Carlile belted out a frenzied rendition of “Woodstock” during a performance-packed night that left many in the room, especially Mitchell, with tears streaming down.

“I could retire now and let others do it,” she joked as she accepted her award. “Everyone was splendid.”

“You liked it ?” she asked the audience for applause, before joining the artists of the night to sing “The Circle Game” and “Big Yellow Taxi”.

Stills summed up the mood: “God bless you Joni Mitchell, for being in our lives.”