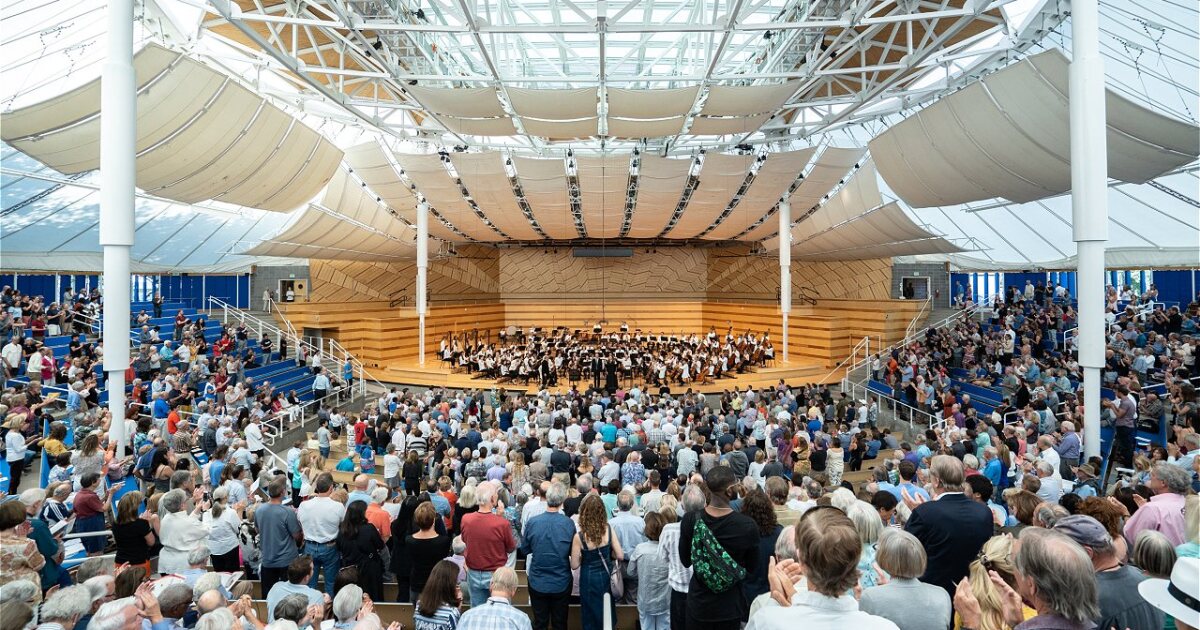 This transcript has been edited for clarity.

The 73rd Aspen Music Festival starts today. As has been the case every summer since 1949, the Festival will feature classic favorites – but, this year, it will also feature an array of diverse musical styles you wouldn’t normally associate with classics.

Our music festival correspondent Chris Mohr brings us a conversation with the head of the Aspen Music Festival and School.

Mohr: Alan Fletcher, President and CEO of Aspen Music Festival and School, is committed to deepening the diversity of musical styles featured in the tent. While Beethoven is part of the canon of traditional classical programming, these “traditions” have left many other composers in the shadows.

Alain Flecher: We therefore go back through history and examine the contributions of composers who have been forgotten or who have never been recognized in the right way. As you say, from our very beginnings in the 1950s, we had a tradition of new music. And we’re proud to continue that, and especially to seek out diverse voices in new music.

Interview with Mohr-Fletcher: Can you give us some examples. I mean, I saw a mariachi band come here – maybe you could tell us a bit about that gig and other gigs that have very different musical approaches than you might expect from a classical music festival.

Arrow: We are super happy with mariachi. It will be July 27, Wednesday 5:30 a.m., under the tent. It’s a free concert. Tickets are not necessary. There’s going to be a kind of fiesta before with a taco truck and, of course, a tequila tasting.

Mohr: This is Mariachi Sol de mi Tierra. They are performing on July 27. Aspen Music School string students will learn Mariachi techniques. The show will also feature Folklorico from Aspen Santa Fe Ballet. So there is diverse music. There’s also a wide range of instruments on the main stage, including some you might not associate with classical music.

Interview with Mohr-Fletcher: You have a saxophonist — I don’t remember her name — but I see her several times on the program. Can you tell us a bit about it, because it’s an instrument that has always been something of a forgotten child of the classical repertoire – although saxophones have appeared from time to time, but not as one of the central instruments in a traditional orchestra.

Arrow: Yeah, interesting. Jess Gillam is the person you’re talking about. Steven Banks, also a brilliant young saxophonist from New York, will be with us. It was partly the idea of ​​Nick McGenan, another of our favorites. And it is a baroque evening. He will perform concertos originally written for classical reading instruments with saxophone. And when he came up with that, I said, “I think Bach would have loved that.” Obviously the saxophone didn’t exist when Bach was writing, but I don’t think any composer in history has been as full of adaptation and improvisation to fit the moment as Bach. And so I think the idea that these wonderful musicians who play the saxophone can now play this baroque repertoire is going to be great.

Mohr: The Music Festival program also features many audience favourites: violinists Gil Shaham and Bobby McDuffie, pianist Joyce Yang, soprano Renée Fleming and guitarist Sharon Isbin. Many of these beloved artists were here as students in their younger years. Sharon Isbin will add to the diverse musical palette when she teams up with Indian sarod and tabla players for her Strings for Peace project.

Arrow: And I think all of these people were students, and some of them are also part of our faculty. But we’re just thrilled to have them with us every year. And yet, we have always focused on beginning artists. It’s, if you will, part of our business model to find bright young people, give them a start, and then they—like Gil for example, has done all his life—reciprocate and be with we. Another example is Renée Fleming. A very good example is the 18-year-old who won the Van Cliburn contest last week.

Mohr: This 18-year-old is Yunchan Lim. On July 28, he will perform in recital at the Harris Concert Hall. Here he is in his winning performance at the Van Cliburn playing Rachmaninoff’s 3rd Piano Concerto.

Arrow: He’s one of the great, great talents I’ve seen in my entire career. And we’re glad he’s here.

Mohr: As for the orchestral concerts, there will be at least three per week. But Wednesday’s Aspen Philharmonic concerts had to be canceled because they did not find accommodation for 80 students in Aspen’s hot housing market. Even with the cuts, the festival is still spending a record amount on housing – over two and a half million dollars. And housing isn’t the only expense that hit the ceiling. Moving hundreds of Steinway pianos is also astronomically expensive.

Arrow: People can appreciate the cost of shipping these days. We have a deal with Steinway, which we are very lucky to have, and they ship around 200 Steinways from their warehouse, but shipping the pianos this year has been an overwhelming expense. Now we have space on campus over the summer, but all of these pianos are actually sold out. We used to have a Steinway sale at the end of the season and people could come and see the pianos on stage. But this year, they are all sold out.

Arrow: More than that.

Interview with Mohr-Fletcher: Tremendous. So not a day goes by that we don’t have the opportunity to hear music start very, very soon at the Aspen Music Festival and School. Thanks again, Alan.

Bennet: It was Chris Mohr, with our Arts and Culture Office Edlis Neeson, in conversation with Alan Fletcher, President and CEO of the Aspen Music Festival and School.