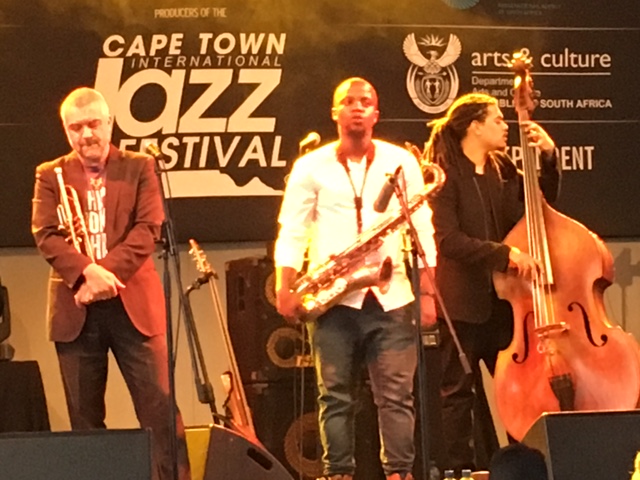 Covering the Cape Town International Jazz Festival 2016 was a moving experience that expanded my concepts of South Africa on this first visit.

It was more than musical. I was in South Africa, the country that enacted apartheid with the same shameless hatred that America applied racism, segregation and lynchings to it.

South Africa. The ANC house. The home of Nelson Mandela, Ahmed Kathrada and Stephen Biko (died in police custody, 1977). Like their black American brothers (Malcolm X, Dr. Martin Luther King Jr.), they were committed to freedom and ready to die.

Being at home in the homeland was an opportunity to witness through my lens and examine the myths and truths of South Africa. To dispel American propaganda and that vile sleight of hand that always tries to get away from the truth.

Stepping into Cape Town’s huge, state-of-the-art convention center among lively music fans, it was easy to understand black emancipation, but from their gaze and conversations it was clearly understood that the struggle was on full swing. force on both continents.

This continuous struggle is maintained by a musical connection – the excitement of improvisational movements, a rhythmic flow that brings us all together to dance in its most fiery moments, relieving each other from the loud sounds of life’s struggles.

Namesa Mdhluli, a festival publicist, said there were more than 35,000 people attending the two-day festival (April 1-2). Like all jazz festivals, it was about so much music, so little time. More than 100 artists have performed in the five halls of the convention center.

One of the most popular performances of the weekend was that of South Africa’s Legendary Ladies in Song, Dorothy Masuka and Abigail Kubeka, with Lemmy “Special” Mabaso.

They performed at Kippies, which appeared to be the size of a football field (with three large video screens) that could hold at least 2,000 people, most of them standing and dancing to every groove. Actor Idris Elba made an appearance on stage for the introduction.

Masuka is known as a jazz singer, but her fusion of swing and Zulu melodies gave the sound of jazz another perspective. At first, his political comments, like his song â€œDr. Malanâ€, put him in exile by the apartheid government for over 31 years, and every copy of the song was destroyed.

Kubeka is more of a cabaret singer but just as swinging. She was discovered by Miriam Makeba and performed alongside Eartha Kitt and Sarah Vaughan. “Special” played a mean saxophone and blew his whistle. One of the most catchy performances of the festival with a band that beat feverishly.

For jazz straight to African skating rhythms, Benjamin Jephta Quintet has followed the jazz tradition with its South African roots. Jephta is one of the young (pistols) from South Africa double bass players, electric bassists and acoustic bass players.

The composer has toured his comrades: pianist Kyle Sheperd, trumpeter / flugelhornist, saxophonist Sisonke Xonti and drummer Sphelelo Mazibuko. Their repertoire includes songs such as “Homecoming” (Jephta), the name of their current album.

It is a mid-tempo mix, somewhat blues oriented, which allowed the group to diversify into a mellow piece with a bewitching saxophone solo on the lines of a stimulated Coltrane prayer, with a lively drums in the background. and piano riffs.

These musicians were in an intuitive mode, never playing too many notes but allowing the audience to bask in the groove. They turned out to be no strangers to the hard-bop context, with drummer Mazibuko moaning as if he was from the Elvin Jones drum school.

â€œI want to give the listener a musical biography of my life using the harmonies and melodies associated with my upbringing,â€ Jephta said. Don’t be surprised if these talented jazz cats show up in concert in New York City.

Amadou Bagayoko and Mariam Doumbia, known as Amadou & Mariam, are internationally regarded as traveling components of the blues. Their combined voices, along with Amadou’s blues guitar, are a force in Africa and the world.

They had a hypnotic magic that captivated audiences (many of their fans) from the first song to the encore. They too played in the larger Kippies Hall, which was packed.

Iconic eclectic composer, singer, bassist and keyboardist Meshell Ndegeocello performed on the large outdoor Manneberg stage in front of more than 1,000 fans of dance and song. She noted, “I try to create an ensemble that flows and feels great.” Her latest album is a tribute to Nina Simone: â€œCome to Meâ€.

The surprise came on the last night of the performance of BadBadNotGood, a young quartet (keyboardist Matthew Tavares, drummer Alexander Sowinski, bassist Chester Hansen and saxophonist Leland Whitty) who combined jazz, hip-hop, rock and improvised improvisation. in their own swing style, which was heavy with jazz improvisation.

As they wrapped up their set, poet, actor and hip-hop icon Yasiin Bey (Mos Def) took the stage and performed for around 45 minutes.

Roberto Fonseca, the Cuban pianist who combines classical, jazz and his Afro-Cuban roots, never disappoints. His classic improv riffs, punchy jazz crescendos, and ever-twisty rhythms were fluid. He said: “I will try to play my two hour concert in an hour.” Of course he didn’t, but it was a pleasure to watch and hear every sound of his solo performance.

Too much music and too little space here. Cassandra Wilson has performed to a sold-out audience in Rosies, with her accomplished band of bassist Lonnie Plaxico, violinist Charles Burham, pianist Jon Cowherd, guitarist Brandon Ross and drummer Davide Direnzo. A fly could be heard flying as Wilson paid homage to Billie Holiday with songs such as “Good Morning Heartache”.

Shiela E., a protege of Prince, performed on the huge Manenberg stage with a large ensemble and was joined by her father, Peter Escovedo. He was a high energy ball performing “Baby Take Some Time”, among other tunes.

TopDogan, an Afro jazz group focused on the sound of Cape Town, featured leading pianist Camillo Lombard, as well as musicians offering a different perspective to the sound of jazz.

For soul, Angie Stone was present as well as SWV. Victor Wooten, known for his creativity on electric bass, kept the audience spellbound with his band consisting of guitarist Regi Wooten and drummer Derico Watson.

It was refreshing to see so many young people at the festival. The press conferences included young journalists who participated in the 17th CTIJF Art Journalism Course. Seeing them involved and asking the artists relevant questions was very inspiring. Yes, music is a bond that brings us together. Be aware that music oscillates with a purpose.