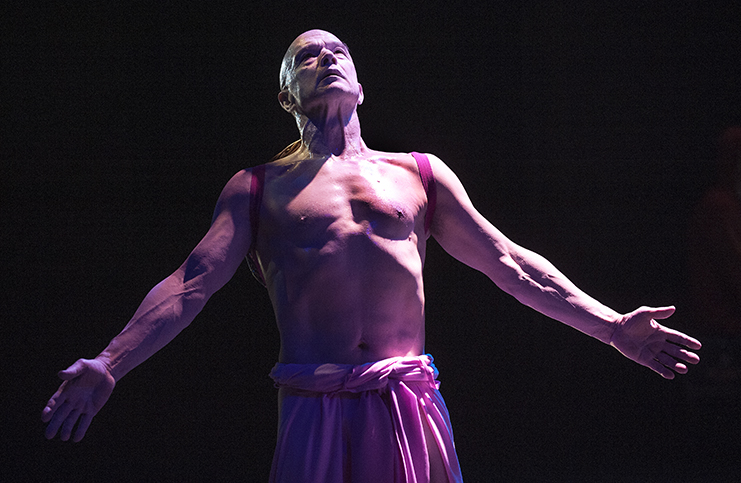 In 1986, Vancouver dance artists Jay Hirabayashi and Barbara Bourget founded the Kokoro Dance Theater Society, and now, after 35 years of sustained dance performance, they will be inducted into the Dance Collection Danse Hall of Fame, a Toronto organization dedicated preserving Canada’s dance heritage.

The Kokoro Dance company takes its name from the Japanese word Kokoro, meaning heart, soul and spirit, and is mainly inspired by the Japanese dance form butohdescribed as a “dance of darkness” that explores the boundaries between the realms of life and death.

Hirabayashi is the son of Gordon Hirabayashi, known for challenging the U.S. government over the internment of Japanese Americans during World War II, and to honor his parents Gordon and Esther, young Hirabayashi played butoh in their memory.

He also thanks his parents for his introduction to dance. “My earliest memory of dancing was watching my mother square dancing when I was six or seven,” he recalls. “My mum loved to dance and she took my sisters and me to see the Bolshoi Ballet when we were kids.”

But Hirabayashi’s dancing career was not guaranteed, as he only started dancing lessons to rehabilitate one of his legs after an operation. “I have always been athletically active and found my first dance lessons to be physically and mentally challenging,” he said. “Although I started very late at the age of 30, I was asked to join the Paula Ross Dance Company after only one year of study at Paula’s studio.”

He moved from modern dance to ballet and contact improvisation. “I learned that ballet was the technical basis of modern dance, so I started taking ballet lessons to learn how to turn better and to develop a certain grace and fluidity in my movement,” he said. he tells. “For me, skiing is always an improvisation where you have to deal with changing terrain. Contact improvisation is similar in that you have to make spontaneous choices when dancing with a partner or solo with the floor as your partner.

Then, in 1980, Hirabayashi saw a poster for a presentation by Harupin-ha, directed by Koichi and Hiroko Tamano, of Ankoku Butoh – Dance of Darkness. “We had never heard of butoh, so we went to see the show and we never forgot that show,” Hirabayashi said. “Tamano’s solo took our breath away and stopped time.”

When Hirabayashi and Bourget formed Kokoro Dance, they wanted to explore and develop their own form of butoh. “Butoh is not a specific technique,” he described. “It’s a search for its own original and unique way of moving.”

In 1995, Hirabayashi traveled to Japan to study with butoh pioneer Kazuo Ohno. “He would talk to us for an hour and then ask us to get up and dance what he was talking about,” Hirabayashi recalled. “He gave no instructions or corrections.”

Hirabayashi had to search inside himself to follow Ohno’s instructions. “He told us not to imitate his way of moving and not to use any technique,” Hirabayashi said. “He would look at us for ten or fifteen minutes and then stop us and tell us he didn’t think we understood what he was talking about.”

Ohno patiently continued to verbalize his subject and asked the dance students to try again. “This pattern would repeat for the rest of the class and subsequent classes,” Hirabayashi said. “These were the hardest classes I’ve ever taken because we were totally on our own while trying to move in a way we’ve never done before.”

Despite this artistic development, Hirabayashi and Bourget struggled to build their dance company and career for many years. “When we started Kokoro Dance, Barbara and I had four kids to raise and we had no funding,” he said. “We both had to take turns caring for the kids while juggling multiple part-time jobs to support our dancing careers.”

Hirabayashi reports encountering systemic racism in Canadian government arts funding systems. “The Canada Council for the Arts has based its funding on peer review,” he said. “They would send reviewers to our performance, who would then write reviews which formed the basis for determining where our work deserved funding. However, in 1986, there was not a single dance company funded by the Canada Council for the Arts that did not have an English or French name.

At the time, he says, there were no other butoh companies and no real peers to evaluate the work of Kokoro Dance. “It took us six years to get our first company grant from the Canada Council for the Arts,” he says, “and we only got that first grant when we asked that no artistic director of a dance company funded by the Canada Council for the Arts is allowed to evaluate us and send someone from any other performing arts discipline instead.

Today, Hirabayashi is honored to be inducted into the DCD Hall of Fame. “We understood when we created Kokoro Dance that there was an ecology of systems that we had to initiate if we were to survive as butoh artists,” he said. “If we were going to have dancers work with us, we had to start teaching.”

He predicted decades ago that Kokoro Dance would be a long-term project without necessarily immediate results. “If we were to give our dancers opportunities to grow, we had to perform whenever there was an opportunity and if there were no opportunities, we had to create our own opportunities,” he said. he declares. “If we wanted to survive, we had to build an audience, so we performed outside of the normal dance milieu.”

Hirabayashi and Bourget have created over 200 dance works and plan to create, perform and teach in the future. “We will be leading the 28e annual intensive Wreck Beach Butoh performances in July and also performing at the Powell Street Festival on July 31,” he said. “In September, we will be participating in the National Association of Japanese Canadians Gei: Art Symposium in Victoria, BC, September 15-18, along with over 100 other Japanese Canadian artists.

And that’s not all: in March 2023, Kokoro Dance will present the 23rd Vancouver International Dance Festival, including performances by Hirabayashi and Bourget of their own work.

The CFPB once again a federal priority – NMP