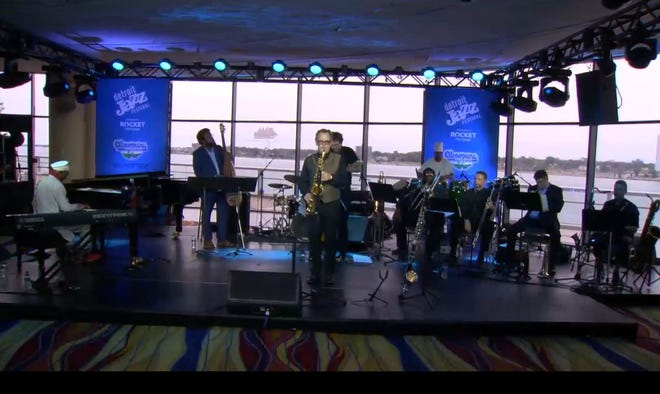 The first full day of the completely virtual Detroit Jazz Festival was a breathtaking journey through many forms of jazz, 13 hours of almost non-stop music that drew viewers from around the world.

At various times of the day and night, members of the public who watched the Facebook and YouTube live streams at home recorded themselves from all time zones in the United States, Europe and as far away. than Melbourne, Australia.

Following: “Singing is spiritual for me,” says Gregory Porter, due Sunday night at the Detroit Jazz Festival

Following: Highlights from Friday performances at the Detroit Jazz Festival

The day started with Festival Foundation Collegiate Combo Competition 2021 winner L Stop from New York University. Remember the names of these young men – pianist Carlin Lee, bassist Warren Louie, drummer Anton Kot, alto saxophonist Tiger Diep and tenor saxophonist Cole Palensky – because they all go far, and Detroit is the one. one of the first musical scenes to recognize it. .

Lee’s originals â€œSelf Controlâ€ and â€œKindnessâ€ kicked off the shoot, followed by a smooth, untitled Louie original that prompted the group to ask viewers for suggestions on how to name the beautiful piece. Lee has proven to be a stable anchor for the group, both as a gracious and confident leader and with his magnificent piano work on numbers like “Clean Jawn” and perhaps the highlight of the together, “Ripples”, written by Kot.

Trumpeter Etienne Charles, winner of the Best Outfit of the Weekend Award, brought an ensemble as colorful as his outfit at the start of Saturday afternoon with a cheerful mix of his “Creole soul” that got viewers moving in Their houses. A tremendous surprise was a steamy, gently unfolding version of Henry Mancini’s “Lujon” (aka “Slow Hot Wind”) which originated from the album “Mr. Lucky Goes Latin” and was immortalized in a key scene. of “The Big Lebowski”.

Charles was accompanied by the mighty Godwin Louis on tenor saxophone, the economic flavor of Alex Wintz on guitar, Axel Tosca Laugart on piano, Barry Stephenson on bass and the indispensable Harvel Nakundi on drums. Charles also doubled the congas with dazzling percussion work.

Following: Trumpeter Etienne Charles and his band Creole Soul bring a mix of styles to the jazz festival

Alicia Olatuja’s powerful voice was all the rage with viewers. Many may not have known her name when this year’s festival roster was announced, but she is welcome in Detroit anytime.

Her tribute to female singers and songwriters was a feast of love, with viewer comments expressing more and more excitement as each new but familiar song began. Brenda Russell’s debut hit “So Good, So Right” raised the sky, and Joni Mitchell’s “Cherokee Leaves” received a warm welcome online. A sultry, stripped-down â€œNo Ordinary Loveâ€ seemed like it couldn’t be overcome, then she ended her hour with a full, Muscle Shoals-worthy rendition of Tracy Chapman’s â€œGive Me One Reasonâ€. The sleeper of the ensemble was a rising take of Angela Bofill’s â€œUnder the Moon and Over the Skyâ€, a tasteful choice.

Olatuja’s excellent neo-soul-esque group consisted of Richie Goods on bass, David Rosenthal on guitar, Jon Cowherd on piano and drummer Shirazette Tinnin, one of the weekend’s great heroes. She also had a great performance the night before as part of Friday’s all-female Woodshed Network.

Kenny Barron’s legendary set was pure class, a dose of classic and sophisticated swing. Pianist Barron, killer bassist Kiyoshi Kitagawa and still in the pocket drummer Johnathan Blake brought groove and fun to tracks like “How Deep Is the Ocean” and “Aquele Frevo AxÃ©” by Caetano Veloso.

Kitagawa stood out strongly on Thelonious Monk’s â€œCook’s Bayâ€ and â€œShuffle Boilâ€, which also included a nice solo by Blake. Blake’s vibrantly patterned French cuffs really drew attention to her hands and the great job they did; his passionate composition on Barron’s original “Bud-like”, especially when the song went into a high-octane swing, morphed into a raucous solo. Channeling eternally influential pianist Bud Powell, Barron’s playing remained agile as ever, quick, punchy notes showering down from his fingers and driven by what Jellyroll Morton called “the Spanish hue.”

An added treat was offered when the bassist and drummer left the stage for Barron to perform a solo version of Eubie Blake’s standard “Memories of You”, with a magnificent rubato intro.

Following: Kenny Barron, due at the Jazz Festival on Saturday, has Motor City memories stretching back decades

Keyon Harrold’s “Jazz and the Birth of Hip Hop” segment was popular with home viewers, and the trumpeter did a great job of demonstrating the place jazz still claims among hip-hop, one of the news stories. American art forms based on jazz. Highlights include Mobb Deep’s â€œShook Ones,â€ featuring samples from Herbie Hancock and Quincy Jones, and Black Milk’s â€œSo Goneâ€ as special guest, which sampled Bob James’s â€œNautilusâ€. (James himself will be performing during Monday’s festival lineup.)

Detroit-native Black Milk’s unpretentious and caressing flow on his original â€œLaugh Now, Cry Laterâ€ belied his harsh lyrics, a difficult story about police brutality and city life. The mix of next-generation jazz and R&B has shown that bringing the two forms together in a mill does not automatically extrude what is called ‘fluid jazz’, but can also create something radical, exceeding limits and thinking.

Omar Sosa & the Havana-Detroit Jazz Project provided an inspiring moment, with Cuban and Detroit musicians jamming to Afro-Latin rhythms with successive melodies. Festival Foundation President and Artistic Director Chris Collins rocked the house on the tenor saxophone, tearing it apart from the first track and occasionally doubling the bass clarinet.

The mighty Sosa, whose hands apparently cover all 88 keys at a time, was a dynamo, beating on the piano and directing with his whole body; sometimes the groove was so good that he had to get up and shake his butt while playing. Bassist Ernesto Mazar Kindelan was a very valuable player, as was super funky Chuck Newsome on guitar.

Kurt Elling’s musical drama â€œThe Big Blindâ€ was the centerpiece of Saturday night’s lineup, and what a spectacle it was!

Saxophone icon Jerry Bergonzi burned it down after “The Big Blind”, his tone as fiery and fiery as it was 40 years ago when he was touring with Dave Brubeck. A disharmonized â€œWitchcraftâ€ and a closer set â€œAwakeâ€ were part of the extraordinary set he delivered with trumpeter Phil Grenadier, bassist Harvie S, drummer Jason Tiemann and pianist Leo Genovese.

On the 1 p.m. Saturday broadcast, the festival’s Facebook Live stream peaked when beloved vocal groups Manhattan Transfer and Take 6 joined forces late into the evening for a bouncy and good show. -be drawn from recent and legacy events. Transfer’s 2018 wave “Swing Balboa” was a first bright spot, and Take 6 showed impressive power with the Earth Wind & Fire and Stevie Wonder covers.

As the band sang Steveland Morris lyrics, viewers wrote that they passed out on their couches.

“And maybe also, if you too believed it, you might be overjoyed …”

Following: Manhattan Transfer, take 6 to face the top of the jazz festival on Saturday night

Thirteen hours of world-class live jazz are an embarrassment of richness and a singular achievement when broadcast on multiple platforms to be enjoyed from the comfort of home. It was a more than satisfying day, with two more to come.

When: Keep going until monday

Sunday shows: The festival will be broadcast all day and all evening on Sunday until 12:15 a.m. on Monday. Monday’s performances will start at 11:30 a.m.