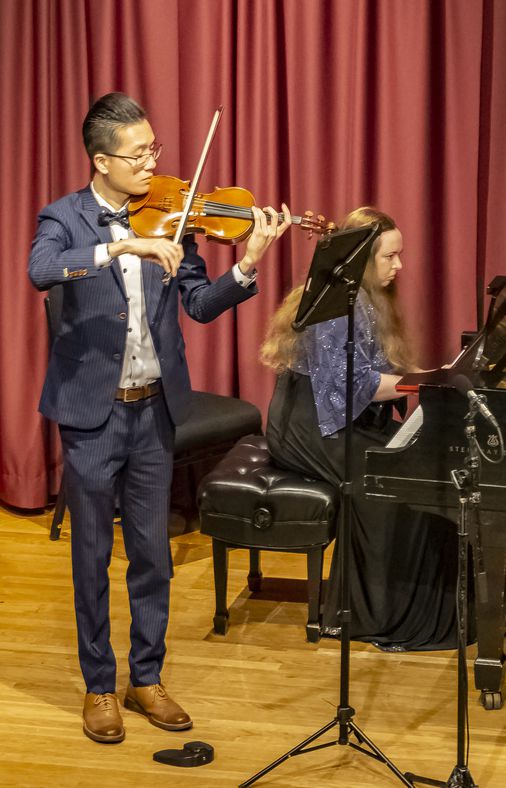 “Duxbury Music Festival 2022 is like a summer homecoming,” said Stephen Deitz, artistic director of the festival, “with former students, many of whom are now well into the first decade of their professional careers, returning as It’s not just about passing the baton to the next generation of artists, but to the musicians the festival has welcomed as they eagerly aspired to make a living in music.

Conservatory President Robert Cinnante stressed the importance of Shafran’s return to the festival from his home country of Ukraine, “finding resilience through music at a time of total crisis in his country of origin”.

The prominence of conservatory alumni illustrates his school’s “strong emphasis on bringing the next generation to the fore”, he said.

The festival’s opening night features what the school describes as “one of the most thrilling duets ever written for strings, Handel-Halvorsen’s Passacaglia,” performed by Cho on violin and Huh on viola. The program also includes Ravel’s “dreamer” Piano Trio (for violin, cello and piano) and American composer George Gershwin’s variations on the popular jazz hit “I Got Rhythm” for two pianos and four hands. Deitz will combine with conservatory faculty member Regina Yung on Gershwin’s favorite.

Programming a four-concert series is “like putting the pieces of a puzzle together,” said Cinnante, who drew inspiration from his own musical background to collaborate with Deitz in planning the festival. The opening night program is meant to be “a tour de force to build momentum”, he said.

The second concert of the festival, on Monday July 11, entitled “L’Chaim”, celebrates Jewish voices. The theme is an arc to the idea that Duxbury is “a welcoming and inclusive community”, Cinnante said. The program features works by Erich Korngold, a 20th-century Jewish composer who fled Europe and found a home as a film score composer in Hollywood. It also includes the theme from “Schindler’s List”, a popular work written by John Williams (here written for a string quartet); and a clarinet sonata written by Leonard Bernstein, performed by conservatory artists Peter Bianca, clarinet, and Mijin Choi, piano.

The third program will take place on Wednesday, July 13. Entitled “Cocktails and Concert”, it will celebrate “music and mixology” and will include an excerpt from “Cocktail Suite” by Dana Suesse. Suesse was known as “the Gershwin girl,” Cinnante said, because like him, she fused elements of popular music with classical. The program will also include various popular Gershwin melodies, ragtime favorites and specially created cocktails for the audience.

At the center of the final concert, on Friday July 15, a major work by American composer Aaron Copland, “Appalachian Spring”, will be performed by a 13-piece chamber orchestra. The work, originally commissioned by dance director Martha Graham, explores “that synergy between music and dance,” Cinnante said. “It’s one of the things to look forward to the most” from the festival, he said.

The concert celebrates the 25th anniversary of the Duxbury House of the Conservatory at the Ellison Center.

The Duxbury Music Festival will also present a free community concert at the Duxbury Senior Center on Thursday, July 14 at 5 p.m., featuring former artists performing familiar themes from composers such as Mozart and Chopin. The conservatory’s former artists “take full ownership of this concert,” Cinnante said. “They designed the program and will carry it out.”

The Duxbury Music Festival is an important event for the conservatory, said Cinnante, who became president last year. “He is one of the shining stars of the Conservatoire de la Rive-Sud. We don’t slow down in the summer,” he added, “we speed up.”

Tickets for Duxbury Festival programs, as well as performances at the conservatory’s Hingham campus, are available on the South Shore Conservatory website, www.summer.sscmusic.org.

Robert Knox can be contacted at [email protected].

An option when the salary arrives too late