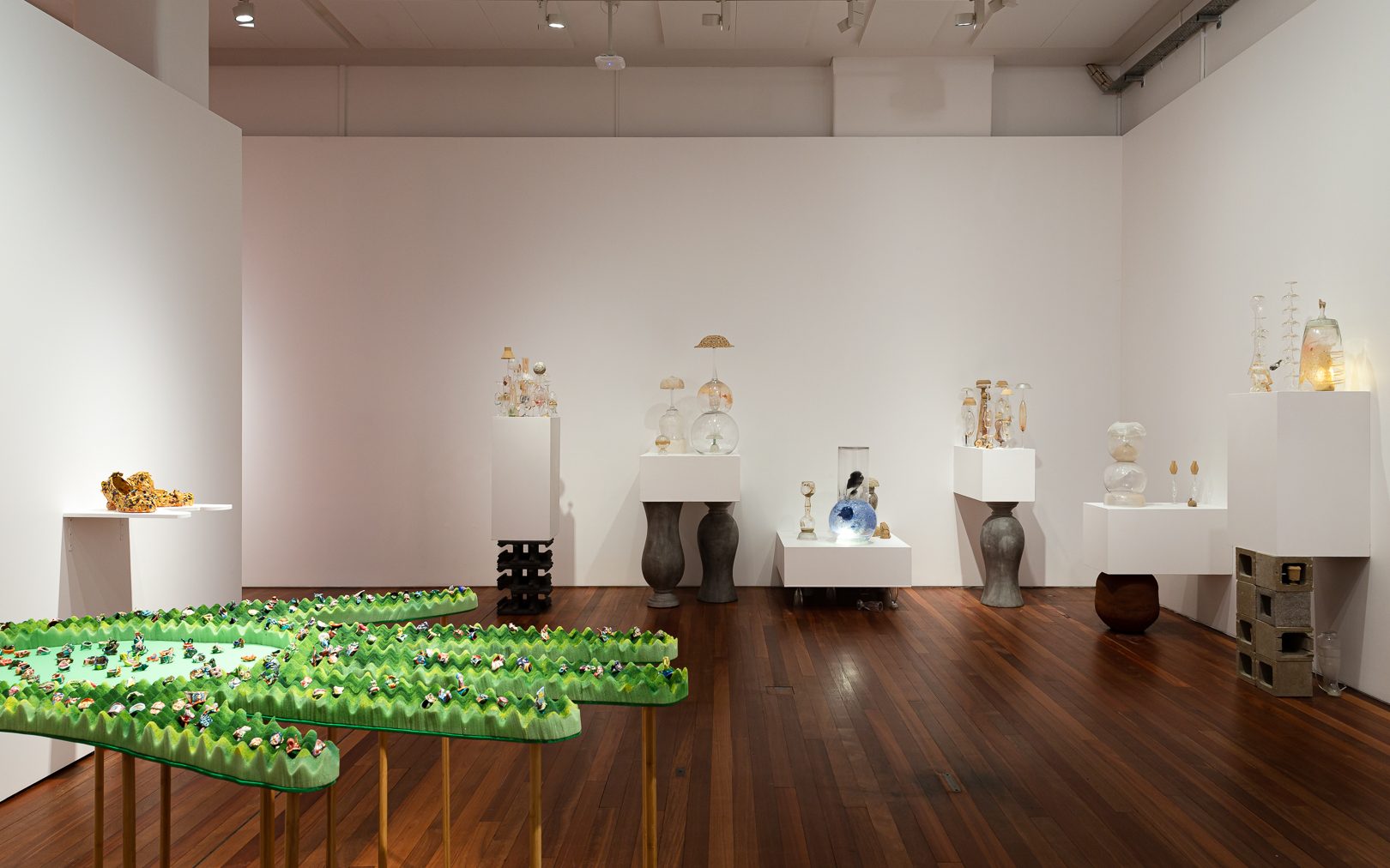 From emergence to mid-career: advice from artists

Amidst the excitement of having your first institutional show or major performance, there can be a lot of pressure and anxiety for emerging artists at the start of their careers. Where do you go from here and what are the next steps? How do you organize your time and energy, while taking care of your mental health?

ArtsHub spoke to three artists at different stages of their careers to give you some insight into the considerations involved in transitioning from early to mid-career.

What was a turning point in your career?

Based in Perth, Daisy Sanders is a multidisciplinary dance artist and currently a mentee of the 2022 STRUT Dance Mentorship Program with Lucy Geurin. Sanders told ArtsHub about the path that led her to where she is today.

“A very big part of my career that took me from emergence to mid-career was actually being very sick,” she explained, “I had a long recovery from the chronic fatigue and so I work with the body in a way that is very focused on energy sustainability and healing.

For Scotty So, a Hong Kong-born, Melbourne-based artist who creates multimedia works and crafts drag performances, participating in the 2020 NGV Triennale was a major career moment that accelerated his practice.

So told ArtsHub, “I had a conversation with my college supervisor (who I have so much respect for and who really guided me to where I am now) when he came to see my performance and NGV work.

“He told me that I would have to go on and create works/projects that are on a similar level within two years after this huge exhibition to stay visible in the art scene, so I had that as a goal after the triennale.”

Ceramic artist Emily Hunt, recent recipient of the Fauvette Loureiro Memorial Fellowship for Mid-Career/Established Artist and currently based in Berlin, told ArtsHub: “There have been two moments in my career as an artist where I felt very grounded and confident in my work, that was in 2014 and now.

She continued, “After a flurry of success and initial attention, there was a long time when I completely lost my confidence as an artist, even though I was continuously working and exhibiting. There was financial pressure after being represented by a gallery. There was pressure to continue. Looking back, my move to Berlin in 2017 was a major career reset, as I had to start from scratch.

What do you think are the expectations of being a mid-career artist?

Sanders said: “For me, mid-career or approaching mid-career, that’s when I go, ‘Okay, I’m going to stay.” I really clearly feel like I’m here for the long haul and I feel deeply passionate about participating in the world as an artist.

“So of course the question is how do you do it sustainably and not burn out,” she added.

“Artistically, I feel like my development is really consolidating and gaining in energy and clarity. A big part of that is also having deep connections in the industry and across different disciplines in Perth.

However, Sanders also believes that artistic careers are harder to define, especially in monetary terms.

‘The mid-career label sometimes comes as a shock to me…While I feel really connected and really inspired, my practice is quite deep and I’m ready to put in the work, there’s a lag because it’ is still very difficult to increase your employment and income.

Hunt added, “An expectation I had as an emerging artist was that I would be financially stable when I entered mid-career, which was unrealistic. I know some amazing mid-career artists who aren’t financially successful. Money is not an indication of talent.

The fact of having chosen to be an artist as a way of life is enough for me to continue to be, because being an artist is a gift.

So echoed the financial difficulties of being an artist, adding that one’s artistic practice could be very different if there was monetary stability. “I would always say this to my younger self: buy bitcoins and invest in properties to become financially independent, so you can create the art you desire and don’t have to worry about sales.”

Lily: 10 tips for artists to increase their productivity

It is important to manage your time and energy to achieve your career goals, what is your strategy/approach?

Hunt told ArtsHub, “There’s definitely a pressure to say yes to everything and it’s a hard lesson to learn how to say no.” Residencies are quite disruptive to me, I don’t trust them.

“I think I’m more wary of everything in the art world after a few negative experiences, and that approach suits me much better. I don’t go blindly into opportunities anymore – I put my practice first.

‘I have a stable schedule for my week, family comes first, then art, so socialize. I try not to see people at least three days a week, so I can concentrate. Hunt said.

Sanders said, “I’ve become a lot more discerning about what I’m willing to do…I figured I need to minimize opportunities where I’m paying because that keeps me as a customer and a learner.”

Asking if there is a ‘bad’ opportunity, Sanders said it has to do with establishing that sense of self-esteem, adding that ‘if it’s not a complete ‘yes’, then it’s is a “no”.

‘If someone offers you a position as a performer or collaborator, to really check with yourself, “Is it deeply in line with my values ​​and where I want to grow artistically?”

As someone approaching mid-career, you need to be more discerning, you need to really build your self-esteem.

Sanders added, “I know I will work very hard and very rigorously when I feel safe and trust the people I work with.” When resources are limited in the arts, which is often the case, we need to consciously think about how we can create caring ecologies, and this is an important part of my practice.

Sanders added: “Care is an easy word to use, but it’s actually a very rigorous practice – it takes a lot of sensitivity and a lot of communication.”

For visual artists, this attention often comes through their relationship with galleries, and So struck gold with its representation by MARS Gallery.

“I think it’s important to have a gallery that can help on the business side because they have so much experience in different parts of the art world. [MARS] have been so supportive of my career and really helped get my work seen by different curators and organizations,” he said.

What was a proud or career-defining moment for you?

Hunt told ArtsHub that exhibiting at Casula Powerhouse was a dream moment come true. “When I was a teenager, I went alone to Casula Powerhouse to see the contemporary art exhibitions. It was a very mysterious place for me. It was a defining moment for me to exhibit a large installation there in 2014.’

She added: “The University of Sydney Scholarship [Fauvette Loureiro Memorial Scholarship] represents something very important to me, the institution always supports my work. He is the decisive moment after all that I have been through in recent years.

Likewise, So said having exhibited his works twice at the NGV in recent years felt like a big moment of coming full circle. So the series of photos, Masks from China (2020) which debuted at the NGV Triennale (and now in the institution’s collection) also made an appearance in their latest exhibition QUEER.

“The Triennale was such a huge show and I was included quite late in the selection process, so that was a surprise as well,” So said.

“Originally these photos from the Triennale were shown in the context of the pandemic, so many audiences didn’t realize they were self-portraits of me in drag, so now it’s very interesting to see them in a different context which is really the intention of my art – there are always layers of work and looking at them from a different angle you can see different meanings.

More recently, So starred in the promotional video for Melbourne’s RISING festival, working with artists like Silky Jazz and earning recognition from singer-songwriter Kylie Ann Minogue.

Sanders said two international internships (with Geoff Sobelle in the United States and an artist residency with the Irish company Teaċ Daṁsa) not only opened his eyes to the possibilities of his practice, but also grounded his commitment and his sense of belonging to Perth.

“I kind of thought that I would go abroad and that would lead to more work abroad, but what really happened was that they really helped me consolidate this what I wanted to do as a leader and a creator and how I want to bring people together – they prepared me to be really passionate about being in Perth and being a dance leader here.

Moreover, it was non-results-based funding that helped Sanders achieve this goal, the value of which should not be underestimated.

“These pots of money are mind-boggling value, I literally don’t think I’d make it through mid-career without them, and they’re disappearing.” [It’s the] funding that gives artists time to grow, to make connections, to focus on practices – it’s the ultimate opportunity for career development and practice development. Rather than making me more self-centered, the result is that I have so much generosity.

To wrap up, Sanders offered a piece of advice for up-and-coming artists currently making this journey. “Good work takes time. It’s very easy to get stuck in the grant cycle and the calendar year to feel like you need to progress at a certain pace and need to prove your commitment or prove your development. I don’t really subscribe to it.

“I have wonderful mentors who have told me that my existence as an artist is tied to all of these things [my research, teaching and practice] – I am not defined by the fact that I present works, even if it is part of my ambition, but in fact my practice is a continuum that takes place under the works,” she said.

Hunt also offered, “Don’t worry so much about how long it’s going to take, just be patient.” Your trajectory will be different. Receiving recognition later in life is actually better for your mental health.