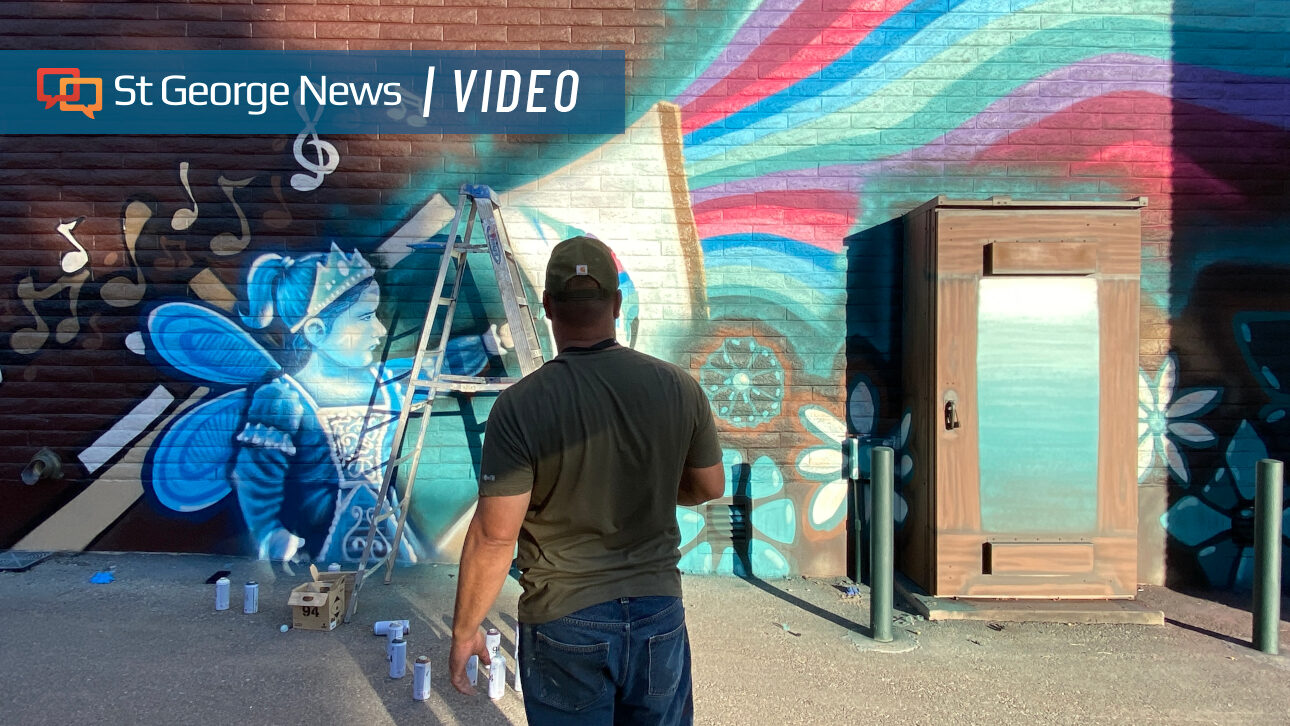 ST. GEORGE – Reggae tunes and colorful clouds of spray paint floated through the air in the alley adjacent to the Electric Theater at 68 E. Tabernacle Street in St. George on Monday afternoon.

A passer-by on the street stopped to look down the alley, and instead of finding the solid dark brown wall that had been there the previous week, he saw four graffiti artists describing a mural that depicts Charlie Chaplin filming a pow dancer. -wow Shivwits and a jazz band being painted by a brush artist.

“Do you paint? Peskador asked him. “Do you want to paint some? “

The man refused, saying he mainly worked in his garden. But the two had connected.

â€œThe love we receive here is unlike anything I have ever painted,â€ Peskador told St. George News, before going back to work. â€œIt’s nice to paint where you are appreciated. “

These are the same artists who painted the St. George Art Museum a year ago. Michelle Graves, deputy director of arts and events for the City of St. George, said she was pleased with the public reaction to the art museum’s mural.

â€œIt was a spectacular, larger-than-life mural that celebrated hope,â€ she said. â€œWe invite everyone to participate in this year’s celebration of art, culture and community with this new mural showcasing our history.

The new mural is the result of a collaborative effort between the City of St. George, Art Around the Corner and the DocUtah International Documentary Film Festival.

Two films slated for last year’s DocUtah Festival, which was postponed by the COVID pandemic, will feature the artists and instead be included in this year’s festival.

â€œProphets, Teachers and Kingsâ€ gives audiences a glimpse inside the dark and sometimes violent world of Los Angeles’ graffiti scene. The film follows the artists Skill and Fear as they recount their 35-year journey, from juvenile delinquency to the infamy of urban art.

In “Alice Street,” Peskado and fellow Oakland artist Desi Mundo, who also worked in the alley on Monday, form an unlikely partnership to tackle their most ambitious project yet: a four-story mural in the heart from downtown Oakland.

Mundo said the subject of the St. George mural – Charlie Chaplin, the rocket in the moon’s eye, the Shivwits dancers, the saxophonist and the girl painting a canvas – were responses to the commission.

â€œWe wanted to represent film, Aboriginal culture, dance, music and the visual arts,â€ he told St. George News. â€œWith the Shivwits dancers, I wanted to make sure that the Aboriginal community is at the forefront of conversations in St. George and recognize what land we are walking on. “

Rhondalon Crawford, Chairman of the Board of Trustees of the Art Around the Corner Foundation, said the new mural aims to remind us that â€œby understanding our past and looking to our future, St. George continues to be a place dynamic and welcoming for the enjoyment of all. . “

â€œThe partnership with DocUtah and the City of St. George demonstrates our community’s commitment to all the arts and to providing our citizens and visitors with a wide variety of artistic experiences.â€

David is a journalist, educator and playwright. He has written for Zenger News, the Christian Science Monitor, the Barton Chronicle, the North Star Monthly, and the Northland Journal, among others. He has covered various beats including breaking news, court and crime, sports, the arts and entertainment. His writings on theater appear regularly in American Theater Magazine, Contemporary Theater Review (UK), ConJunto (Cuba) and HowlRound.com. David’s play, 800 Days of Solitude, on how solitary confinement affects minors and their families, received the 2018 Christian Moe Drama Writing Award. He received a BFA with summa cum laude honors from the DePaul University and an MFA in dramaturgy from Southern Illinois University, Carbondale.

The return of the Katara European Jazz Festival