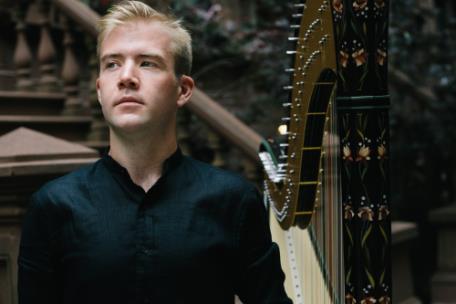 The Music at St. Paul’s 2021-22 artist series continues with a concert by harpist Parker Ramsay on Fridays at 7:30 p.m. The program features Ramsay performing his own transcription of Johann Sebastian Bach’s Goldberg Variations, originally written for keyboard, which he recorded to international critical acclaim.

Speaking of his decision to transcribe the Goldberg Variations, Mr. Ramsay said, “I wanted to show the world that the harp is an instrument of beauty, sincerity and transcendence, standing alongside the keyboard and string instruments. as a vehicle worthy of the music of JS Bach.

Mr. Ramsay’s career is notable for its breadth and crossing of boundaries and instrumental genres as a performer on harp, organ and harpsichord. He holds a BA in History from the University of Cambridge, an MA and Artist’s Diploma in Historical Keyboards from the Oberlin Conservatory, and an MA in Harp Performance from the Juilliard School. Equally at home on modern and period harps, Mr. Ramsay is dedicated to integrating contemporary music and historical performance and reinvigorating the existing canon while immersing himself in new and under-performed works.

Paul Thomas, Music Director of St. Paul, said, “We are delighted to feature harpist Parker Ramsay in this solo recital with his groundbreaking transcription of Bach’s Goldberg Variations, which should sound magnificent in our Sanctuary. This concert, like our others, will include pandemic safety precautions; and we encourage, as strongly as possible, that participants be vaccinated if they can. We give thanks to God for the ability to make and listen to live music, a blessing that by its recent absence has become even more special. We hope you will come and discover this beauty with us.

The 2021-22 Artist Series concludes Friday, March 25 with the Joshua Espinoza Trio, an ensemble with a unique approach to exploring jazz improvisation within the contours of a classical chamber music aesthetic.