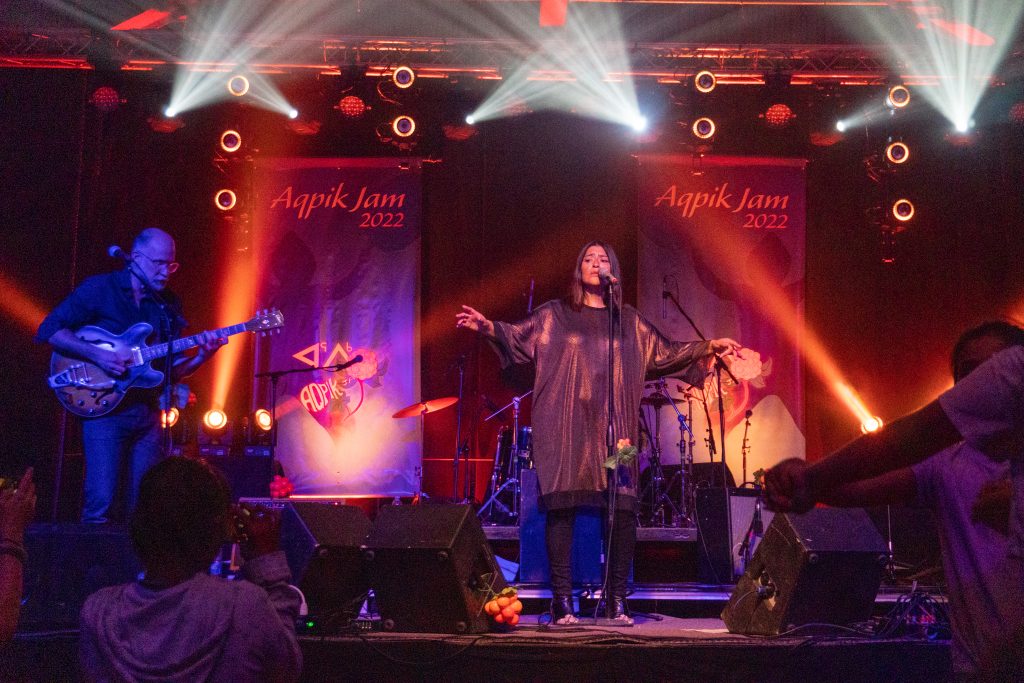 After a very fine introduction by her group, singer Elisapie entered the stage to the cheers of the crowd at Aqpik Jam, the Kuujjuaq music festival that is close to her heart.

The crowd was completely immersed in their Wednesday night performance at the Forum, the village’s hockey arena. She was the headliner for the second night of the four-day festival which returned this year after two years of COVID-19 postponements.

“We have been celebrating this festival which has been going on for over 20 years,” she said.

The day after her show — just after leaving the hostel in Kuujjuaq — she went to the hotel restaurant with a coffee and a bag of Honeycomb cereal intended for her panic.

In an interview, she explains her relationship with Aqpik Jam.

The festival had an influence on his early career. His first memory dates back to the 1990s, when his father traveled from Salluit to Kuujjuaq by boat for this.

At the time, Kuujjuaq was considered a “big city, a bit like the south,” she recalls. The festival was happening.

Elisapie – full name Elisapie Isaac, but she only performs under her first name – asked her mother if she could go, only to be told: ‘You’re too young, you’re a teenager and there’s a bar the low.”

She said she “hated it all summer, because Blue Rodeo was playing, and I was a huge Blue Rodeo fan!”

“I always tell this story, because two years ago, Blue Rodeo invited me to sing with them at the Montreal Jazz Festival. It was such a beautiful moment.”

His first performance at Aqpik Jam dates back to his early years as a singer-songwriter. It was a significant moment for her.

Still in his formative years, his identity as an artist is not yet clearly defined.

“I would almost apologize on stage, I was always trying to find my art,” she says.

Even though his first performance was far from his best, playing Aqpik Jam was already a big deal.

“There have always been local musicians in Nunavik,” she says, and “Aqpik Jam was an opportunity for them to be heard. It’s super important here, it’s like Osheaga du Nord”, comparing it to the independent music festival in Montreal.

The festival is also a time when artists from across Inuit Nunangat come together.

“It gives us a chance to get out,” says Elisapie.

“I may be a more established artist, but I’m still a kid when I see Tim and The Band play” – one of his favorite childhood bands. “In the North, you can’t be a star. There is a familiarity here that will always keep you humbled.

Yet that familiarity is where another kind of performance shines best. It’s about bringing the narrative that makes sense to the audience.

The realities of Nunavimmiut may not resonate as much with a southern crowd as they do with a northern one.

Elisapie took her Kuujjuaq crowd on a trip, trying “to put images to the words they can’t express.”

As a storyteller, she says, “it becomes a responsibility to do just that.”

From her formative years to self-discovery, she wanted to “break free” as a young artist. In 1999, she moved from Salluit to Montreal, a life change that opened her perspectives as an artist.

“I needed it. I wanted it,” she says. “I felt like at 22 I already had a lot of experience in the North and I needed to be where I could be free to do whatever I wanted.”

In Montreal, she found a place of artistic freedom, where she could be “free to do whatever I want, express strange ideas, a place where I could feel free to express whatever I want.”

Montreal proved to be more than an artistic epiphany, but also the place where his career would soar.

“I have to be in the right place at the right time,” she says. “Sometimes life will give you cues, and if you’re observant enough, caring enough, and willing to take enough risks, it’ll get you places.”

In a small café in Montreal, she met Alain Auger, who would later become her counterpart in the duo Taima (the 2005 album won a Juno award for best Aboriginal recording) and documentarian Hugo LaTulippe.

“At the time, there weren’t many aboriginal artists in Quebec,” and after meeting her musical partner, she quickly toured Europe and America.

Then, after meeting filmmaker LaTulippe, she will direct a documentary for the National Film Board.

“My film career and my music career, all in one place,” says Elisapie. “Those were my cues, and from then on it never stopped.”

It was a start to realize his childhood dream.

“I just want to be the best I can be,” she says. “I was a very sensitive child, and my way of doing things was to invent a world. And I really respect this little girl’s dream.

Again, a balance has to be found because this artistic world has brought in her artistic personality, a performer, enjoying crowds and being on stage, “and I feel very comfortable in that environment.”

On the other hand, she is naturally quite the opposite…

She believes she has found this balance, “a beautiful to balance,” which helped her to push her limits.

“Having made peace between me and Elisapie the artist, they are going well together now,” she says.

This strong internal base is its best defense against anxiety.

What makes it better, she says, is having a team that will listen to you, that will live up to your terms.

“When I ignore them for a few days, they know, and eventually I’ll tell them it gets overwhelming, they back off immediately.”

Balancing her identity and making sure she’s well cared for is why she says “right now, I’m loving my life.”

His 2019 album, The ballad of the runawaywas nominated for a Juno for Indigenous Music Album of the Year.

The avant-garde of his art and his innovations will be fully exposed in his next album.

“It’s over, and next year when the album comes out we want to have screenings,” she says.

“I am currently working with filmmakers in Salluit”, all to produce video content that will be in symbiosis with his music.

“The images will allow me to really understand the music, and to further develop the narration, a really exciting project!

She adds: “I think it’s going to move a lot of people here, because it’s not about me, it’s about the North.”

5 reasons why we are super proud of our artists