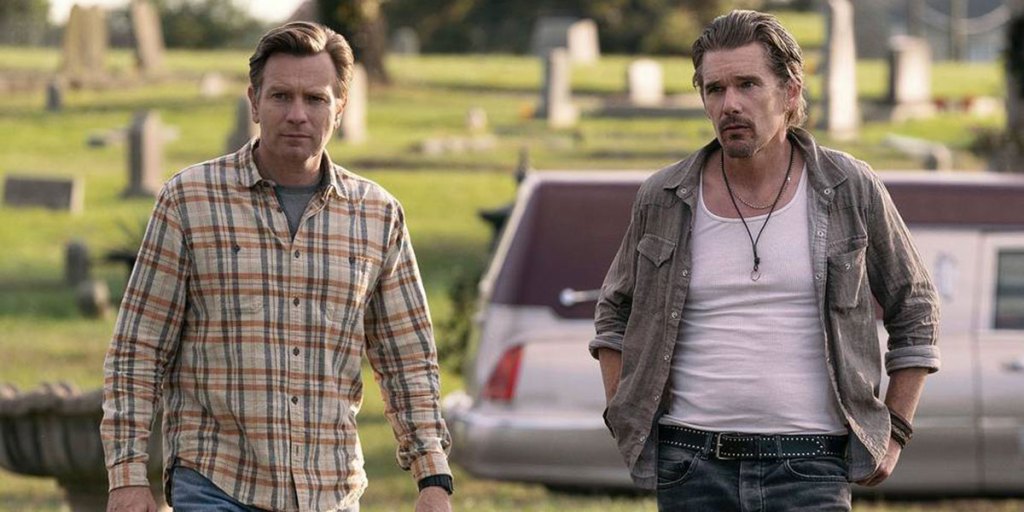 The charming two-handed game of Rodrigo García Raymond and Ray is the double act we didn’t know we needed, an unlikely couple – Ethan Hawke and Ewan McGregor – in an equally unexpected comedy from a director best known for his sweet girlish dramas. Truth be told, Toronto’s Roy Thomson Hall was a little big for it (Sundance might have been a better platform), but this Apple Original Films TIFF gala presentation went well and might just be this year’s independent sleeper, with awards potential for its ensemble cast, and Hawke in particular.

The setting doesn’t suggest a barrel of laughs – uptight Ray (McGregor) shows up at his half-brother, laid-back jazz musician Raymond (Hawke), with sad news: their father is dead. It soon becomes clear that neither has any affection for the old man – he was, after all, “a bitter son of a bitch”, says Ray – but Raymond insists that they attend the funeral, if only “to see what it’s like to put him underground. Ray relents and the two embark on a journey of self-discovery that takes many surprising and fun twists, despite the seeming gravity of the situation.

Their dad, called Harris by the brothers, is the third wheel in this odd couple scenario, and the pain he’s caused them in life (he’s kind of a dad who gave his two sons the same name just to play with them) is matched by the trouble he makes in death. To receive their inheritance, the couple must dig their graves at sunset, but they must first go to the funeral home, where Harris bought the cheapest coffin of them all – a literal wooden box – in which he buried. asked to be buried naked and face down, a bizarre custom that has something to do with his “Tongan roots” (Harris is found to have reinvented himself a lot later in life, converting to Judaism from Buddhism). Next, they visit his house to pick up a motley selection of heirlooms, where they meet Lucia (Maribel Verdú), his free-spirited lover, and finally they head to the Chapel of Rest, where Ray meets Kiera ( Sophie Okonedo), Harris’ nurse in her final days.

The two brothers have some nice sad bag chemistry together — as Ray puts it, they’re “a couple of grown men whose lives just didn’t pan out” — but their individual identities are distinct. Raymond, nervous and restless, is at the end of his third failed marriage, having suffered the indignity of being cuckolded by his own father, while Ray, a swaggering womanizer, is on the rebound from a serious addiction to the heroine. Over the course of the film, each meets a woman who proves sympathetic to their needs, a somewhat sketchy plot device that nonetheless works thanks to the caliber of the cast.

Although the two have the same amount of screen time, things might work out a bit better for Hawke than for McGregor. McGregor is the comedic foil here, and his timing is wonderful, his startled bunny face doing the heavy lifting whenever the dry existential humor threatens to veer from Beckett into Monty Python territory (wait for the goblets to appear). McGregor also fires a gun, a very amusing twist on the Chekhovian convention that has been raging in Toronto.

Hawke, however, has more of an arc, and his relationship with Harris will prove to be the more conflicted and mysterious of the two. While it’s wonderful to see Verdú and Okonedo, talented and charismatic performers, their roles don’t go as far as those of the two guys, and there comes a point around the 80-minute mark where Raymond and Ray seems to run out of road, leaving the remaining time to match the two couples, with more or less success.

Still, there’s a lot to like here, and with the fall festival season failing quite dramatically to deliver the awards season juggernauts they promised in principle, García’s film might slip up on voters. with a sweet-sweet campaign based on its powerful acting credentials and poignant exploration of secrets and family ties. As Coda shown earlier in the year, Apple has some form on this.