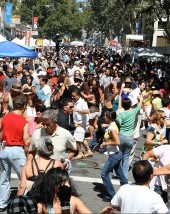 One of the nation’s biggest jazz festivals is taking place in downtown San Jose this weekend, but you would never know it from reading the entertainment sections of San Francisco’s major dailies and weeklies. The San Jose Jazz Festival is celebrating its 20th anniversary this weekend, but there were no articles or event listings on the festival in either the SF Chronicle’s Sunday Datebook or the Chronicle’s entertainment section. Thursday 96 Hours, nor in the city’s two weekly newspapers, the San Francisco Bay Guardian or the SF Weekly. The only San Francisco newspaper that published articles on the San Jose Jazz Festival – according to a Google News check – was the San Francisco Examiner. Google News says the Examiner has posted five articles or lists on the San Jose Jazz Festival in the past few weeks, including a full list of featured artists in yesterday’s Examiner’s online version – but nothing in the print edition of Yesterday’s Examiner’s weekly entertainment section. .

The San Jose Jazz Festival was known as the “world’s largest free jazz festival” until 2006 when the festival charged $ 5 entry to help cover costs. Festival organizers and City of San Jose officials feared this year’s festival would be canceled after two major sponsors, Comcast and Southwest Airlines, withdrew their support. The festival was saved when Comcast’s main competitor, AT&T, agreed to be the main sponsor.

What could explain the lack of coverage of one of the country’s biggest jazz festivals by the San Francisco print media? San Jose Jazz spokesman Paul Fernandez said in a statement that the festival’s tight budget limited paid advertising and the festival relied on free media such as public service radio and television announcements, news stories and calendar listings to publicize this year’s festival. Fernandez said the festival sent The Chronicle and other local media outlets several notices and releases about the festival. In recent years, the festival has received favorable coverage from Chronicle writers Jessie Hamlin and the late Phil Elwood, Bay Guardian articles by Lee Hildebrand and Derk Richardson, and various articles from SF Weekly writers.

The San Jose Jazz Festival has been described as one of the Bay Area’s premier musical events and many fans thought it unusual that there was no coverage of the festival in the newspapers of San Francisco. The entertainment editors of Chronicle Datebook, Bay Guardian, SF Weekly and The Examiner did not respond to calls for comment.

Producers of free festivals, street fairs, and nonprofit events like the San Jose Jazz Festival say it’s getting much harder to produce free or reasonably priced festivals. The $ 15-a-day admission makes the San Jose Jazz Festival one of the cheapest music festival tickets in the country. Walk-in tickets for the seven-day New Orleans Jazz and Heritage Festival, the country’s largest music festival, this year cost $ 50 per day. Several San Francisco music festivals, the San Francisco Blues Festival and the North Beach Jazz Festival, were canceled this year due to a lack of sponsorship and increased fees for required municipal permits.

Newspapers and commercial broadcasters often tie their coverage of events to advertising and sponsorship. Producers of music festivals often form partnerships with media outlets to ensure that their event receives media coverage. A major sponsorship or advertising arrangement between a festival producer and a television or radio station may result in promotional announcements and on-air interviews during morning broadcasts or evening television news during prime time. A newspaper sponsorship or advertising deal can result in a front page article, interviews with festival artists, and even a special festival supplement. As newspaper and broadcast advertising revenues decline, will major events like the San Jose Jazz Festival have a harder time being covered without some type of advertising link or sponsorship with a newspaper or broadcaster?