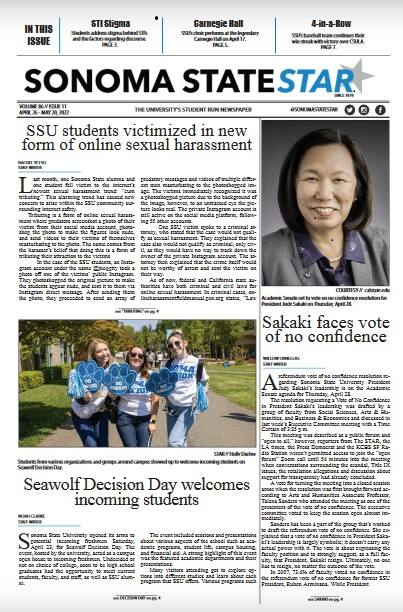 Reporters and editors from the Sonoma State University student-run campus newspaper worked late Tuesday evening to assemble and deliver 500 copies of their most recent issue to campus newsstands.

The April 26 edition of the Sonoma State Star featured a front-page story about the ongoing no-confidence vote against Speaker Judy Sakaki. She is at the center of a scandal after a $600,000 payment to a former SSU provost following allegations of retaliation related to allegations of sexual harassment by Sakaki’s husband, Patrick McCallum.

On Wednesday morning, however, Star reporters and editors discovered that nearly 100 copies of the new edition, representing all the newspapers on display in the lockers in Salazar Hall, the administration building, had gone missing.

“This week we took out the papers between 7 and 8 p.m., and when we went to Salazar on Wednesday morning, all the lockers were completely empty of our papers. And that never happens,” said Star News editor Mary Helen Rowell.

A standing bathroom sign had been moved in front of one of the racks, obscuring it from passers-by, Rowell said.

A week earlier, on-campus maintenance workers informed Star editors that the middle pages of their final two issues – including coverage of the scandal involving Sakaki and a controversial college budget proposal that calls for cuts and to consolidations – had been removed from campus newspapers. , mainly at Darwin Hall, the science and mathematics building.

SSU reporters aren’t sure who’s behind the missing articles or pages, but Montana Lacey, an SSU communications student and opinion columnist for the Star, said they “suspect it’s someone who tries to silence student journalists because we are covering stories they don’t want an audience.

Salazar Hall, where all copies of the latest edition have disappeared, includes Sakaki’s second-floor office.

SSU spokeswoman Julia Gonzalez did not respond Friday to a request for an interview about the missing papers.

Sakaki, who has led the university since 2016 and faces a vote of no confidence beginning May 6 among SSU faculty, denied retaliating against former provost Lisa Vollendorf, who reported sexual harassment complaints against McCallum by several university employees.

It’s one of two crises that have rocked the Rohnert Park campus in recent weeks, which faces a growing budget emergency amid a drop in enrollment that began six years ago and has deepened. during the pandemic.

Myles Grabau, editor of the Star, said the paper’s dogged coverage of the twin crisis exposed student journalists to shoutings of fake news and verbal attacks from some faculty members critical of the coverage.

“I don’t understand why we’re portrayed as the bad guys when we’re just getting the facts and trying to report everything that’s going on,” Grabau said.

“It’s hurtful because we work so hard and we do all of this to make sure we’re doing everything right and by the book and people don’t care,” Rowell added. “I feel like a lot of people on campus don’t take us seriously, despite all the hard work we do.

The Star has won national and state awards for its coverage, including the top honor in 2018 as California’s top college newspaper.

His April 19 scoop on the leaked budget proposal, in particular, drew strong reactions from some faculty members, Grabau said.

Lacey, the opinion columnist, said her communications teacher, Emily Acosta Lewis, who also sits on the school’s budget committee, lashed out at the paper during a recent class, accusing reporters of ‘”To invent information adapted to our program,” she said.

Acosta Lewis, contacted by The Press Democrat on Friday, said she was surprised “at the idea” that she would “talk badly” about the Star.

“To my knowledge, I haven’t said anything that could be interpreted that way,” she said.

Editors said faculty president Lauren Morimoto, who also heads the kinesiology department, used harsh and inappropriate language when she criticized their reporting on the leaked budget.

His comments at a budget committee meeting on Wednesday were recorded, and he can be heard referring to Star reporters, some of whom were in the room, as “adults who need to be held accountable for what they make”.

She suggested that the Star should not have reported on a draft budget document – ​​a common source of news reporting – and that in doing so the paper had misled the campus about how a budget cut of $5.5 million would be realized, according to the recording.

“At least I admit when I’m making up a story,” she said at the committee meeting, prompting laughter.

“It was just very rough and very unprofessional,” Grabau said.

Morimoto did not respond to emails or phone calls Friday seeking comment.

Corinne Asturias, the Star’s educational adviser and former editor of Press Democrat, praised her student reporters. She said the backlash was a learning experience for journalists covering important stories on their campus.

“It’s very annoying because Star students put in countless hours of work. They are very concerned about delivering a timely, accurate and balanced product,” Asturias said.

“The same week we reported on Judy Sakaki’s potential vote of no confidence and budget cuts, we also reported on the queer prom, the baseball team’s winning streak, etc. We cover campus news, whether it’s good, bad, or in between. I’m proud of my students and I think most faculty and students on campus are too,” she said.

The Star’s editors have been scrambling since Wednesday to create posters with QR codes for smartphones linked to their most recent issue, to replace missing print copies. Their next issue should hit newsstands Tuesday night.

Democratic Press Intern Kylie Lawrence is the former editor of the Sonoma State Star. She can be reached at [email protected]

Reflections by Newport Jazz Festival artists on the past, present and future of jazz on International Jazz Day