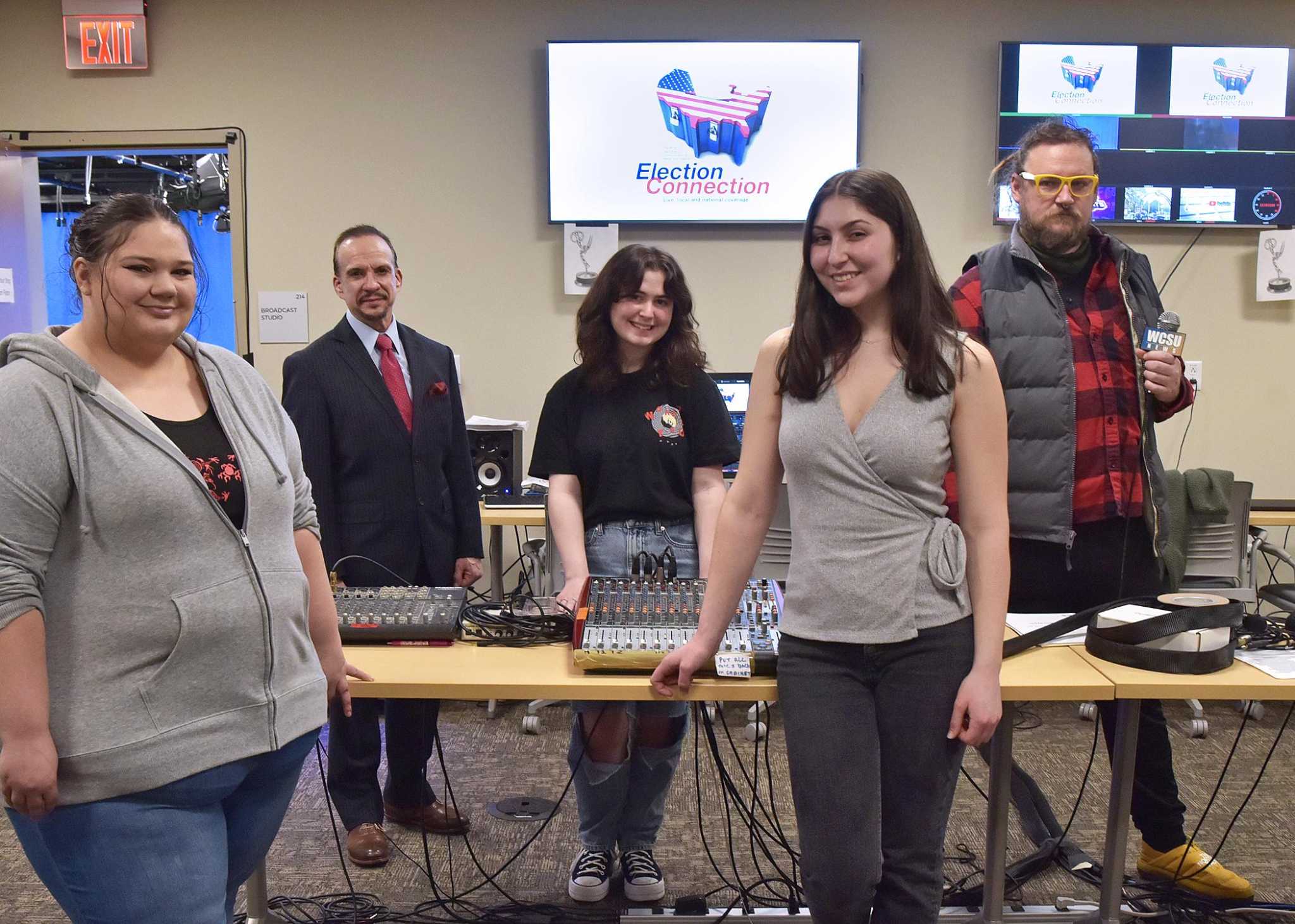 “The Little Mouse That Roars”

“How do you feel? Are you surprised at the outcome of this election? she asked him.

His interview was broadcast via WCSU’s “Election Connection,” a student-run election night that has covered local, state and national elections every November for the past 10 years. This year, the show is honored with a national award from the Broadcast Education Association’s National Collegiate Media Arts Festival.

This is not the first prize the class has won.

Teams of students come out to report live from the polls while a team of students, professors and expert commentators anchor from the studio. The live news broadcast runs from 8 p.m. to midnight or later, and is broadcast on the class’s YouTube channel and campus radio station WXCI-FM 91.7.

And although most students are new to the world of broadcasting, they learn quickly. The group has now won its third award from the Broadcast Education Association.

This year’s class coverage won first place in the Radio Newscast category. About 1,450 submissions arrived at the festival for various categories, according to a WCSU press release.

In April, the students will travel to Las Vegas to receive the award.

Previous accolades include first place in the Television Studio category in 2015 and second place in 2016. The show has also won several awards from the National Academy of Television Arts & Sciences/New England Student Production Awards, including first place for General Assignment – Serious News in 2020.

“The judges, they were so impressed with the quality of the reporting – that we included weather reports with our meteorology students. The coverage and commentary, they said, was exemplary, so it was really nice to hear “Said Barone. “We are up against heavyweights, colleges and universities from all over the country.

But the class held on.

“We’re the roaring little mouse, and we’ve done it again.”

A seed of idea

The idea for the class came to Barone while he was munching on bagels and drinking coffee before an opening ceremony in 2008.

“I said, ‘Imagine this: You have reporters—students—all over the state, and we report the news live, and we go to local facilities. “”

Although initial reception was lukewarm, the idea caught on, and since 2011 Barone and his students have gained recognition on campus and beyond for their live coverage of important races and burning issues.

“Since then we haven’t missed a beat, we’ve had it every fall,” he said.

Classes started with the basics. Students of all levels and backgrounds came together to create a broadcast team, learning as they went. At times Barone had 12 different majors represented in the room.

“We didn’t have a TV studio. We had no equipment to do that,” Barone said.

He begins by teaching them the art of reporting before entering the studio to show them how the production equipment works. It takes a lot of late nights and long hours for everything to come together in November.

“We bring live reports from the field, which means working on computers that have to communicate with each other and send that signal to the main switch. You have to designate who will be in front of the camera, who will be a director who will be TV, audio, etc. “, he explained. “We are just working for this election.”

On a cold November night, the students fanned out, sending live streams and reports on key elections in the region. In the studio, Newtown co-anchor Jacob Schultz led the show alongside news personality and co-anchor Jacqueline Guzda, an associate professor of communication and media arts.

The 2021 award-winning show included up-to-date weather reports, live polling updates from local municipalities, coverage of important voter issues and commentary from presenters. Students reported on major mayoral and first-choice races across the region — places like Danbury, Stamford, Hamden, West Haven and Brookfield — sent information to classmates, worked on sound boards and cameras, and discussed everything from political extremism to abortion litigation, climate change and social justice for their audience.

Barone typically has 25-30 students who enroll in the course in the fall. Last year was different.

Instead of sending six field crews on election night, they could only send two to cover the races in a handful of towns and villages. And COVID restrictions have made it even more difficult for small teams to work.

But they still managed to pull through.

Yet even with the most careful preparation, the technology can sometimes be faulty, something junior Ethan Fiske discovered last fall when the YouTube channel stopped working just before the start of the broadcast. Fiske was performing sound cues and the mixing board for “Election Connection” that night.

“We constantly have to find workarounds, and during live TV you have to do that, so it’s great training,” Barone said.

Indeed, that troubleshooting exercise remains one of Fiske’s favorite and lasting memories of the night.

“On the day itself, we were facing a lot of different challenges,” he said. “You can prepare so much for something, and something else will go wrong. It was quite an interesting night.

Fiske, a musician, hopes to get into audio engineering and production after graduating.

The lessons Barone teaches in the classroom stick with his students. Their curiosity and interest in world events – whether it’s the war in Ukraine or some other major news item – is piqued.

“I have alumni who constantly call and text me about what’s going on in the world,” he said. “It has a lasting effect on them.”