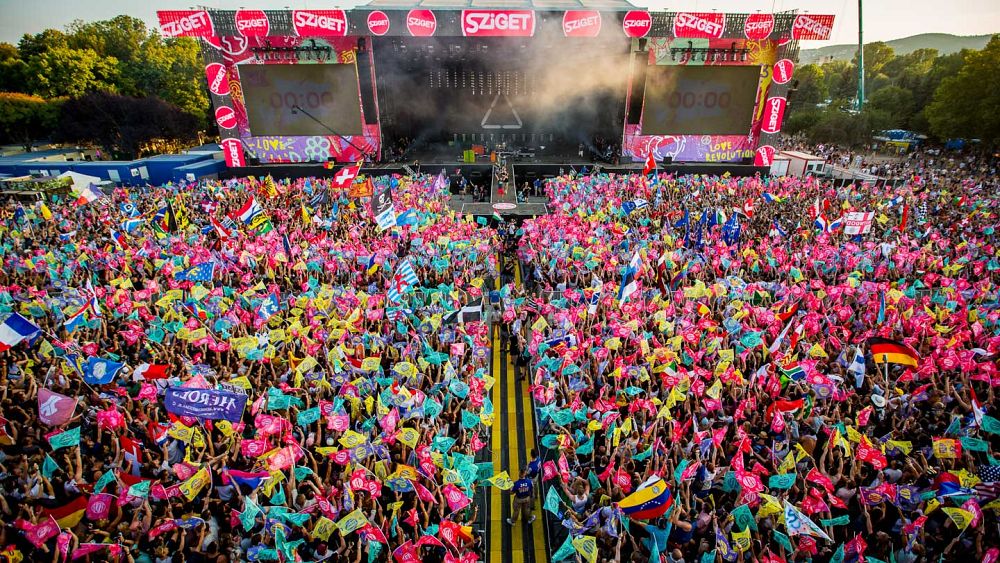 After a two-year absence, one of Hungary’s biggest cultural events, the Sziget Festival, is back in Budapest.

Hundreds of concerts and performances on more than a dozen stages await festival-goers on Liberty Island, a small island in the Danube where Sziget has taken place since 1993.

In order to help you choose the concerts not to be missed, an intrepid selection of Euronews music-loving journalists have selected some of their favorites from this year’s programme.

Here are the acts you may not know but shouldn’t miss, whether in Sziget or in a city near you this year.

I remember at the end of the 90s, my Hungarian parents were returning from their holidays in Greece. They were eating in a small restaurant in a small fishing village near Thessaloniki when they heard a beautiful melody. They were about to ask what the song was when the singing started…in Hungarian. It’s Anima Sound System with their hit ’68’, which was part of Buddha Bar’s first compilation.

The band, like Sziget, formed in 1993, and like the festival, they too have gone through many changes over these almost three decades, with various lineup shifts and ventures into different sound styles.

I’ve never been a fan of electronic acts but I can’t resist the band’s unique Hungarian and international flavor, with great songs like ‘Tekerd’, ‘Csinálj gyereket’ or their hit recorded with Asian Dub Foundation titled ‘ Eleg volt’. Rita Palfi

Anima Sound System will be live on the Hajógyár Petőfi stage on Friday August 12.

According to his website, CMAT is “a global pop star who lives in Dublin with his grandparents and is currently recovering from an AliExpress addiction.”

Global, not quite yet, but singer-songwriter Ciara Mary-Alice Thompson deserves to make it happen. She fuses the glamor of Rhinestone Cowboy with catchy pop tunes, an acerbic wit and an ever-powerful emotional core. After releasing a string of singles last year, like “Another Day (KFC)” (imagine the Nolans singing about being dumped and heading to KFC so they can “double the chicken for moral support “) and “I Wanna Be a Cowboy, Baby!” (think Dolly Parton developing an obsession with Vine and singing about nostalgia for the passes men inexplicably get) She released her debut album this year, titled “If My Wife New I’d Be Dead.” is fun, it’s beautifully written, and despite the vexing spelling of the title, it’s nearly perfect.

And as for this AliExpress addiction, we all have our vices. Do your next CMAT. David Mouriquand

If you go to Sziget to dance with your friends, you would be crazy to miss seeing Folamour.

The must-have French producer and DJ has established himself on the underground dance music scene, following the release of his incredibly versatile debut album “Umami” in 2017 and his second project, “Ordinary Drugs” in 2019. The style, which incorporates a phenomenal and diverse selection of disco, house, funk, jazz and hip-hop records, is sure to thrill any crowd at Sziget.

For a taste of what to expect from Strangelove, check out his legendary Boiler Room set at the Fly Open Air Festival in 2019. Don’t forget to pack your bucket hat! Theo Farrant

Bastille may be one of the biggest names in lineup this year, but they’re my favorite band and, in my eyes, a British treasure despite their French-inspired name. I’ve already been in their top 1% of listeners, according to Spotify, so that’s solid proof of how much I value them. One of my favorite songs is “Doom Days” because it combines a good rhythm with a political message. And of course, I recommend you to discover their most famous song “Pompeii”.

Most of their songs make a great addition to any summer soundtrack, so why not add tracks like ‘Icarus’, ‘Million Pieces’ or ‘Give Me the Future’ to your August and September as the European heat wave continues?

Also, here’s a fun fact for you: some of the band members appeared in Season 7 of Game of Thrones. All the more reason to like them a little more. James Thomas

Two of my favorite artists will be present at Sziget this year, and I wouldn’t want to choose between them: two Frenchies who perform in English and who are essential live.

The first is Woodkid, a neofolk artist I like to listen to when I need an epic soundtrack for a boring day. After all, two of his songs (“Iron” and “The Golden Age”) were used in the Assassin’s Creed video game trailers.

If rapping is more your cup of tea, the second act is Rilès, and it’s well worth your time. Songs like “Thank God” and “Brothers” gave me the morning punch I needed during my sleep-deprived college years. Even after rising to fame, Rilès stuck to the stripped-down aesthetic of his early days when he independently produced his songs from a bedroom in his family’s home. Oceane Duboust

Here we have it.